These days there is a great deal of hubbub about being in integrity in the world. And, running in spiritual and coaching circles like I do, there’s also a lot of shade (yeah, I said shade) being thrown around about who’s being in integrity or who isn’t.

Honestly, what does that really mean?

1. the quality of being honest and having strong moral principles; moral uprightness. “he is known to be a man of integrity”

2. the state of being whole and undivided.

I have spent my life as a teacher of integrity, guiding individuals in realizing they are always in a state of being whole and undivided. And, if I hold my community to expressing their wholeness and completeness then my personal code is a tightrope of integrity.

Last week I had a situation. I screwed up. The moment realized my error I moved into fast action, resolved the problem and realized that no lasting damage had been done. Here comes the sucky part . . . I had to come clean about my mistake. I had to call the person and explain my screw up. For a total of one nano-second I debated with myself about not making that call.

Every mistake I ever made came crashing in on me. From getting in trouble on the school bus (yeah, that one still hurts) to an email to a client that contained a misspelled word where he threated to fire us (it should have been you’re, instead of your; yup, looks like I’m not over that one either).

Every vestige of the belief that I’m still not enough was going to take hold of my choices and get me running. Then my old friend guilt sat down next to me. Most people think that guilt is a feeling . . . well,  it isn’t. It’s a thought. The feeling behind guilt was – you guessed it, “not enough”.

What was I feeling guilty about? Did I screw up on purpose? No! The mere thought that I might have caused someone pain with my mistake was so overwhelming.

In waiting and watching my phone, willing it to ring so my trauma would be over, two Divinely inspired ideas came into my head.

Zebras Are OK And So Am I 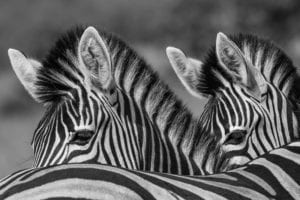 In researching an article on worry, I came across the book Zebras Don’t Get Ulcers. When a fear or flight situation occurs in a zebra’s life (like running into a lion), he has two options: run or be eaten. After he is done running (I like this scenario much better than being eaten), the zebra completely releases the situation. He doesn’t spend the next several days talking it over with his jungle friends or not being able to chew grass because he’s still reliving the situation in his mind. So, in this case, I made a mistake. I took the high road. I didn’t get eaten. I’m okay.

Of Course, Being In Integrity Sucks Sometimes

Our human conditioning is wired to keep us safe. Being honest, in integrity and conscious goes against our natural programming. It’s not always fun doing the right thing. It takes courage and persistence. In my younger days, I would have said it isn’t very rewarding, but now I know the truth.

When I was in corporate America, I watched individuals lie and cheat. And I waited for them to pay the price. Some did and some did not. Truthfully, in the end, when you are out of integrity you will always pay a price.

I’m beginning to understand that being in integrity is like pizza . . . even when it sucks it’s still good.

“I highly recommend Jen’s work, guidance and spiritual acumen for your personal and professional well-being.” - Shelagh

Want to know yourself better and feel more connected, Soul Language, Consciously Connecting With Your Soul for Success provides a way to dive deeper into understanding your Soul Languages… Read More...