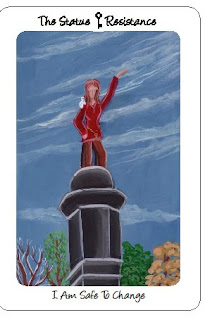 The Keys of Grace Affirmation deck is an easy to use tool that helps you feel more connected to Spirit, your soul and the Universe. As humans, we search for answers and direction. All you need is inside of you and yet sometimes it is difficult to hear, understand or feel that information – that’s where The Keys of Grace can help. Hearing what your Soul and the Universe wants to say to you, is as easy as selecting a card.

A statue is a three dimensional image that has been sculpted, modeled, cast or carved. Once carved, it is forever frozen, holding that one pose. Unlike a statue, it is in our highest interest to keep moving and expanding. If you chose this card, determine if there is a situation in which you are, like the statue and unable to move. Are you not moving because of resistance to change? Have you been trying to fit a mold of how others “see” you? Resistance to change only slows down the process, it does not make it stop. Look closely at the card, even if the statue is not moving, the world around her is… The clouds in the sky, the seasons shown in the trees, even the dove seems to be moving its head. If you release the struggle with change, the resolution will come more easily and quickly. Take a moment to see yourself without struggle and then look at the card again. Can you see how peaceful the statue now looks? Can you see the pride, triumph and readiness of the woman on the pedestal? She has made it to the top and has let go of the resistance, and now knows that the key to whatever she desired was, and is, always around her.

Interested in moving from resistance to something more powerful? Utilize the affirmation of this card: I am safe to change.

I think Ron Rathbun said it beautifully, “Many times people stay in places they don’t like because they are afraid to move. Staying in the same place because of fear and apprehension is like living on a hamster wheel. Step off the hamster wheel by flowing with the changes in your life. Be it a mental or physical change, flow with it.”

“I highly recommend Jen’s work, guidance and spiritual acumen for your personal and professional well-being.” - Shelagh

Want to know yourself better and feel more connected, Soul Language, Consciously Connecting With Your Soul for Success provides a way to dive deeper into understanding your Soul Languages… Read More...